Sometimes, one needs to discuss related subjects that do not by themselves warrant a full blog entry.  Hence the video potpourri series, in which I can talk about aspects of display technology.

Composite artifact color emulation has been around for a long time.  Unfortunately, in many cases it just isn't very good at trying to replicate the look of a composite monitor.  Simple schemes just assign a color arbitrarily to a group of two or four monochrome pixels.  Mainline SVN DOSBox tries to simulate CGA composite color as if it were a VGA mode.  The colors are reasonably accurate to the real IBM CGA cards, but the text color fringing is rather blocky.  There are custom builds that use filtering and 16-bit color to give a more subtle impression of the composite color, but it still looks much, much cleaner than the real image.  You can obtain a custom build with better composite color emulation here : http://www.vogons.org/viewtopic.php?f=41&t=12319&start=660#p501453


While CGA emulation was late in coming to PC emulators, Apple II emulators have always supported some kind of composite artifact color, because that was the only way most games displayed color.  The most popular Apple II emulator is AppleWin, and as of 1.25.03 it used to behave like DOSBox in that it only really displayed 16 colors.  AIPC and JACE are other emulators that try to emulate color clashing on pixel borders, but it the the striping it adds to the graphics is just too rigid.  Today there is a new release of AppleWin, 1.26.06, that does an admirable job of getting the graphics to look close to how they look on a real composite monitor.  This release represents the incorporation of the development of unofficial patches to improve the NTSC composite color emulation over the very basic emulation of 1.25.03.

In order to show the differences between real hardware and emulators, I have taken a photo of my IBM PC/XT running The Black Cauldron with an old IBM CGA card.  Although I do not have an Apple II just yet, the composite colors shown by an Apple II and an old IBM CGA card are almost identical.  The Apple II image will look very similar to the IBM CGA image except for the obvious difference of the white vs. black text area underneath the graphics.

The NES's PPU was designed in Japan in 1982-1983 and only generates composite video colors, not RGB colors.  The 48 rainbow colors it can display are divided into 12 hues, each with four brightness levels.   The other 16 colors are variations of black, white and gray (4-6 unique choices depending on your TV),  Without special tricks, the NES can display 25 of the 64 colors on the screen at a time.  There are three color tint bits that can emphasize red, green and blue colors, combinations of these bit can give you eight times the colors, but they were not often used in commercial NES games.  The color tint bits will also tint white, gray and black.  For this article I will concentrate on the standard 48 colors.

Colorimetry, which is the mathematical method to reproduce the colors the human eye can perceive, was first standardized in 1931.  In 1931 TVs were not ready for the market, and only by the end of the decade the first B&W TV sets were being introduced into the market.  WWII put a halt to TV production, but afterward B&W TV took off and development really started to begin on color TV systems,

The first color TV system, NTSC, introduced a color standard.  Original (1953) NTSC colors were very lush and are called the FCC 1953 standard.  Given that 3-strip Technicolor was still the dominant film color technology at the time NTSC was developed, these colors make sense.  Original NTSC TVs tend to give a very Technicolor-like image.  However, over time (by the late 60s), broadcasters were broadcasting less saturated color images to improve picture clarity.  TV display standards took quite a while to catch up to what was being broadcast.  In 1987, the less saturated and more subtle color standard, the SMPTE C standard, was officially adopted.  SMPTE C was the standard that TV manufacturers were moving toward during the 1980s.  However, not every manufacturer conformed rigidly to the SMPTE C specifications before or after the official standardization.  TV manufacturers were more concerned about their TVs standing out on the sales floor than with color accuracy.

(This has not really changed, for example today's TVs tend to show really bright images with the factory presets.  They also tend to have the Smooth or Natural Motion features on by default, which try to turn film images into TV video images by interpolating frames.  The effect is horrible, imagine if every film was made to look like The Hobbit.)

The Famicom and the NES were introduced during this transitional period.  A gamer may have connected his system to a TV made in 1980 or 1990.  Older TVs tend to display color by the FCC standard or some derivative of it, newer TVs by the SMPTE standard.  But for the reasons described above, actual TVs are likely not to rigidly adhere to any standard.  Moreover, Japanese TVs did not really adopt the SMPTE C standard.

The NES outputs an NTSC color signal, made up of phase shifted square waves (for hue) and voltage levels (for saturation and brightness).  It is very far from RGB model used by computers to define color.  Since the beginnings of emulation, emulator users have often wanted a "true" or "accurate" NES palette.  Good emulators like Nestopia allow the user to customize the palette to their tastes. These emulators can import custom palettes in a .pal file consisting of 192 bytes.  Each set of three bytes gives the RGB color value for one of the 64 NES color palette entries.  Outside of software emulation, hardware video upgrades like the NESRGB and the High-Def NES Mod must define their own palettes and allow the user to select from a couple of palette choices.  The NESRGB allows the user to insert his own custom palette in lieu of one of the built-in palettes NES/Famicom FPGA clones like the RetroUSB AVS and the Analogue Nt-mini also need to define their palettes using RGB color values.

Recently, an individual called FirebrandX has been developing his ideal, accurate palette.  His method was to use a composite video capture device, capture each palette color as displayed on the capture and then using averaging obtain the ideal RGB values for each color.  Over time he has tweaked the various entries and the current version, V6, is in high demand.

FirebrandX claims that he is trying to avoid a debate about what person X and person Y saw on their TV 30 years ago by displaying what the NES was intended to display.  In his palettes, the sky in Super Mario Bros has something of a lavender hue.  Some other palettes tend to display it with a sky blue to a bright blue hue.  This is what Nestopia shows with an "FCC Palette" on the left and FirebrandX's V6 palette on the right : 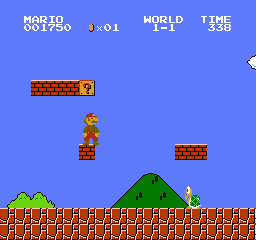 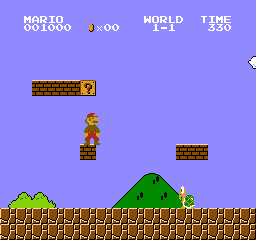 I have two NTSC CRT TVs, and both have controls for contrast, brightness, tint and color.  One TV is a cheap 19" Sylvania with a composite input, the other is a higher-end (for the time) Toshiba with a 27" "flat" tube with a component and an s-video input and three composite inputs.  Both TVs are almost 15 years old.  With the tint control at the middle position, my TVs show Super Mario Bros. sky with a light blue color, no lavender hints to be seen.  I see this color whether I use my Famicom, my front loading NES or my AV Famicom.  Each system has a different PPU revision (E, G & H, respectively).  If I set my TV halfway to the red end of the tint, I will get the lavender tint of FirebrandX's palettes. 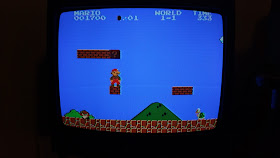 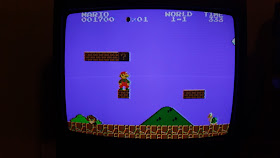 (My camera shows somewhat more saturated colors than the tube does to my eyes.)

I also have a RCA Full HDTV LCD from 2008.  Being an RCA TV, it isn't exactly high end, but unlike my 4K TV, it will accept a 240p composite signal.  On this TV, if I set the all the picture control settings to neutral, I will see the lavender sky.  All of the preferences, sports, film, etc. and the default will give a blue hue for the sky.

Darker blue with a hint of purple :
https://www.youtube.com/watch?v=bzdyp9L7se8

From all this evidence, it is hard to draw a definite conclusion about what the true color was supposed to be.  NTSC systems used to vary quite widely in terms of color reproduction.  Printed material is also somewhat suspect, since most of Nintendo's screenshots (especially from their earlier publication) were taken with a 2C03 PPU.  The 2C03 PPU uses RGB colors, but unless you were playing at an arcade machine or had one of the expensive Sharp Famicom C-1 TVs or later the Sharp Famicom Titler, you would not have experienced it.  The color for the sky on a 2C03 or other RGB PPU has a touch of red in its blue.

The blue color is no less right, however, than the lavender color.  Moreover, if you wanted to ask what SMB's designers, Shigeru Miyamoto and Takashi Tezuka, had in mind, sky blue would be the rational answer.  Their original graph paper layouts for the levels shows that was the color they had in mind and their monitors must have shown it :

In conclusion, FirebrandX's methodology for proving what the "true" NTSC colors are is flawed.  He took his colors based on what his TV capture card reports to be the color.  All capture card come with certain assumptions on how to interpret the color, probably using the SMPTE C standard.  There is no guarantee that the captured colors from the card or device will reflect the colors you actually see from a TV screen.  I believe his capture card interpreted the colors using SMPTE C colorimetry.

FirebrandX's palette and his justification can be found here :

The "FCC palette" I used to generate the Nestopia screenshot to the left, above, can be generated by using this site's default setting :